Visitors to downtown Asheville could soon get a new view of the cityscape at the intersection of Broadway and Woodfin Avenue. 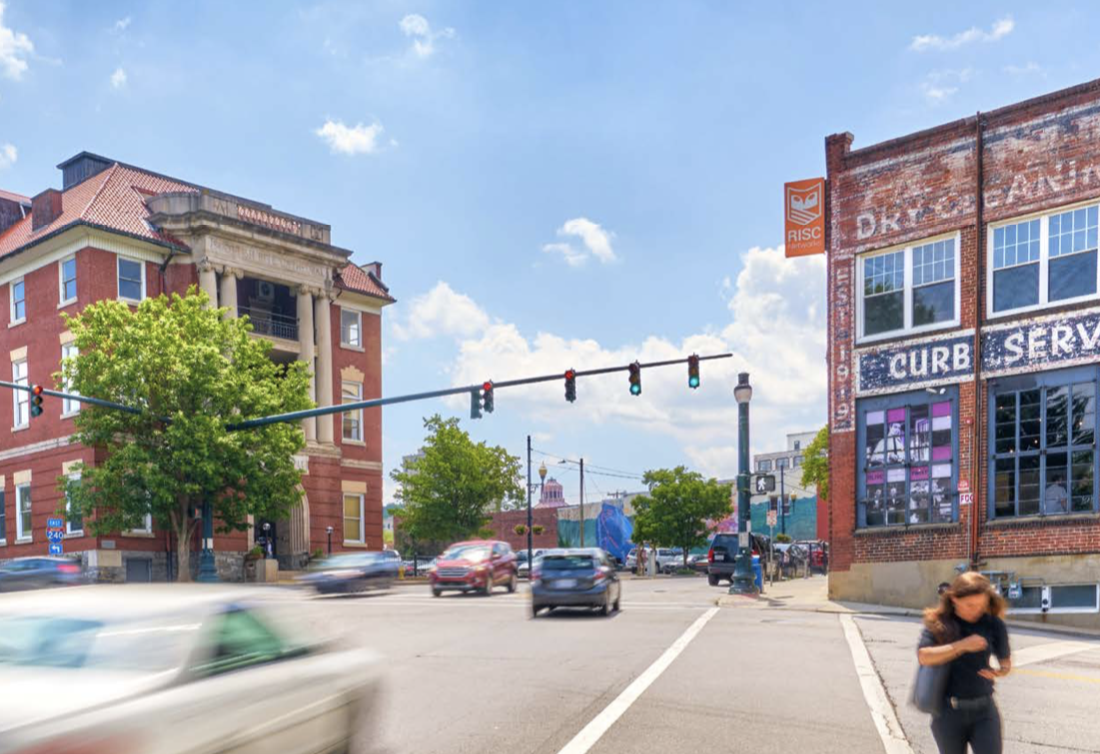 ASHEVILLE, NC (July 25, 2019) - Visitors to downtown Asheville could soon get a new view of the cityscape at the intersection of Broadway and Woodfin Avenue. On this square block at the north end of downtown, Asheville’s architectural jewels are home to cutting-edge arts organizations and centers of community engagement. This intersection sees approximately 17,500 cars each day, but challenges faced by vehicles and pedestrians, as well as lack of wayfinding and placekeeping features, like signage and public art, have kept the area from the full activation that would make it a true gateway district for the city.

In 2017, Center for Craft, recognizing the greater potential of the block, commissioned the Broadway Cultural Gateway planning project as part of its property development initiative at 67 Broadway, which includes the Center’s National Craft Innovation Hub. Currently under renovation, the Craft Innovation Hub will open to the public on November 16 and welcome visitors back into the Center’s historic 1912 building with 7,000 additional square feet of program space, two galleries, a co-working space for the creative sector, state-of-the-art lecture, workshop, and event spaces, and one-of-a-kind maker installations. The Center’s newly renovated building will anchor Asheville’s downtown cultural district on its northern end and provide new opportunities for visitors and locals alike to explore – and engage with – the past, present, and future of the city.

The Center for Craft sees Asheville as a national leader in creative placekeeping, which uses the arts as one important tool to facilitate a more thoughtful approach to urban planning, focusing on the people that live and work in the area with the goal of embracing – and elevating – the history and culture of an area. “Asheville’s future is largely dependent on the health of our creative sector and its relationship to the built environment,” says Stephanie Moore, the Center’s Executive Director. The Center’s National Craft Innovation Hub is a vital step forward for the area, but it’s just one of many ways being envisioned to activate downtown’s north end.

Center for Craft spent nearly 18 months studying national best practices to develop a model for Asheville. Supported in part by a grant-funded partnership with UNC Asheville, the Center hired Asheville Design Center (ADC), a vanguard in local, community-driven design, as a key partner. ADC led a visioning process for the city block defined by Broadway Street, North Lexington Avenue, West Walnut Street, and Woodfin Street in downtown Asheville (referred to henceforth as the “Study Area”). “The Asheville Design Center uses a community-driven design process that starts by listening,” explains Chris Joyell, ADC’s Executive Director. “Our volunteer designers held over 100 hours of conversation with property owners, residents, and merchants that informed our recommendations. We are excited to see these plans spring to life in the coming months, adding new art and vibrancy to the district.” A local consulting artist, nationally-recognized creative placemaking expert, and key stakeholders were engaged to assess area needs and design solutions that would activate the Study Area in an accessible, sustainable way.

The City's Downtown Master Plan completed in 2009 recommended enhancing the downtown experience by cultivating its creative, cultural, and historical character. The Broadway Cultural Gateway presents such an opportunity, while welcoming folks to existing cultural destinations in Pack Square including the newly expanded Asheville Art Museum and Diana Wortham Theatre. Dana Frankel, Downtown Development for the City of Asheville, explains, “A community-driven process like this one helps align goals, identify opportunities and initiate a collaborative approach between public and private sectors. This area is an important gateway and unique part of downtown, including its public spaces and alleyways from an urban design perspective as well as its cluster of uses related to art and culture. Improvements, including streets and sidewalks, can help make the area more welcoming and accessible.”

After identifying major issues within the Study Area, ADC’s team tested a number of potential design solutions during a Creative Intervention event within the Study Area held May 5, 2018. An estimated 1,000 people attended, and 318 participants completed surveys that helped inform the design team’s recommendations. Community meetings were also held with area residents and stakeholders, and focus groups reviewed different design solutions and explored how the Study Area could be more successfully activated as an essential part of Asheville’s vibrant historic and cultural ecosystem. Crucial support also came from the Buncombe County Tourism Development Authority. Stephanie Brown, President and CEO of Explore Asheville, noted that “the intentionally inclusive approach to the development of the plan has resulted in a game-changing gateway to Asheville’s downtown cultural district.”

The final report identifies design recommendations, including adding signage and public art to create a true northern gateway for downtown; sidewalk and crosswalk improvements on Broadway and Woodfin; the creation of Asheville’s first parklet to enhance the pedestrian experience; and activation of Carolina Lane and Chicken Alley to address local feedback and increase public space within the City.

ABOUT CENTER FOR CRAFT
Founded in 1996, the Center for Craft (formerly The Center for Craft, Creativity & Design) is the leading organization in the United States identifying and convening craft makers, curators, and researchers, and matching them with resources, tools, and networks to advance their careers. Over the years, the Center has become a vital community resource, serving thousands of visitors annually. As a national 501c3 nonprofit organization dedicated to advancing the field of craft, the Center administers more than $300,000 in grants to those working in the craft field. centerforcraft.org

The Asheville Design Center, a program of MountainTrue, was founded in 2006 on the belief that everyone deserves good design. ADC recruits volunteer professionals to work with communities to develop design solutions that enhance our quality of life. In 2017, ADC merged with MountainTrue, the region’s largest environmental organization, helping to strengthen the connection between the quality of our built environment and integrity of our natural environment. ashevilledesigncenter.org