The Center selects three curatorial teams to fully develop and mount their proposed exhibition in the Center’s gallery, located in Asheville, North Carolina. 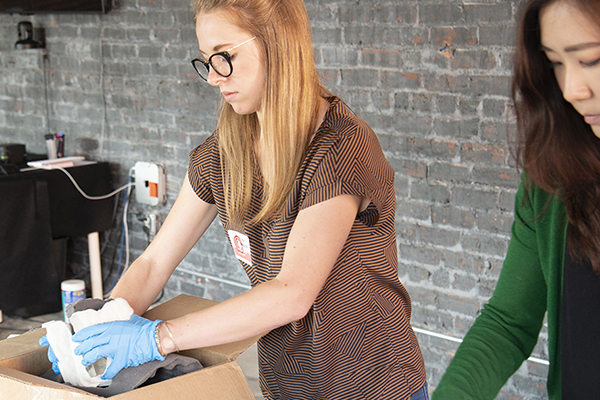 The future of craft is in the hands of the next generation.

In order to create a thriving future, the Center for Craft invests in the next generation by offering Curatorial Fellowships that provide emerging curators the opportunity to spend a year exploring and testing new ideas. The Center selects three curatorial teams to fully develop and mount their proposed exhibition in the Center’s gallery, located in Asheville, North Carolina. The Fellows work with the Center’s Assistant Director and Curator Marilyn Zapf to produce the exhibition, develop didactic material and an exhibition catalog, and deliver a curatorial tour or talk.

2017 Curatorial Fellows Elizabeth Essner, Lily Kane, and Meaghan Roddy curated the exhibition The Good Making of Good Things: Craft Horizons 1941–1979. The exhibition investigates the American Craft Council's watershed publication Craft Horizons, and explores how the magazine documented and shaped the concept of craft as a movement, career, way of life, and cultural phenomenon.

“Craft Horizons took an expansive view of the field – reporting on everything from traditional media to avant-garde dance and fashion,” Curatorial Fellow Elizabeth Essner says. “With so much current interest in the materials and artists traditional to craft, it’s interesting to see how related craft’s past is to what’s happening today.”

After the exhibition launched at the Center in 2017, The Good Making of Good Things has travelled to the Arizona State University Art Museum Ceramics Research Center and is on view from March 7 through June 2, 2019 at the M (the Minnesota Museum of American Art). The Good Making of Good Things is one of the exhibitions featured as part of the National Council on Education for the Ceramic Arts (NCECA) conference in late March in Minneapolis.

The Center for Craft’s Curatorial Fellowship is a unique opportunity for emerging craft curators to get hands-on experience, encouraging them to approach the project in a way that requires new ways of thinking. Curatorial Fellow Meaghan Roddy, who works at Phillips Auction House, says, “[The Fellowship] has informed how I perceive collecting practices and think about a more holistic approach to collecting and presenting a collection as a whole versus a more methodical approach to categorizing works as we do in auction.”

Another strength of the Curatorial Fellowship program is the diverse backgrounds of the applicants. “The inaugural [2017] Fellows were a broad mix: artists, makers, educators, those working in the marketplace – even a film director,” Essner says. “It was inspiring to see how these different viewpoints brought forth new ideas.”

Not surprisingly, the Fellows have an enthusiastic view of the future. “I think that the future of craft will include some imperative rediscovery of craft's history,” says Curatorial Fellow Lily Kane. “There is so much mind-blowing work still to be pushed to the fore that only a handful of people have seen.”

The next group of Curatorial Fellows is currently being finalized for the 2020 exhibition season.

The Curatorial Fellowship Program is administered by the Center for Craft and supported by the John and Robyn Horn Foundation the Windgate Fund at the Community Foundation of WNC. Learn more about the Fellowship.

Read an article in the Twin Cities Pioneer Press about The Good Making of Good Things exhibition.