Shapeshifters Opens at Center for Craft 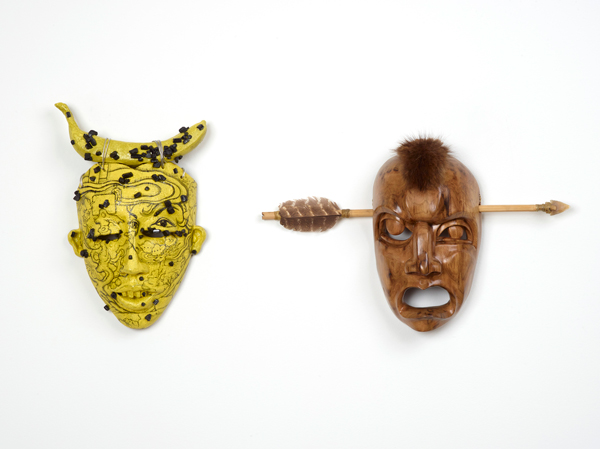 ‍
ASHEVILLE, NC (January 29, 2020) – Center for Craft (67 Broadway) celebrates Shapeshifters, the newest exhibition in the John Cram Partner Gallery. Shapeshifters brings together the works of two acclaimed regional artists, Cherokee-based Joshua Adams and Atlanta-based Jiha Moon, who use masks and other objects to explore culture, material, and representation, particularly in the contemporary American South. The exhibition is currently open and will culminate in a closing reception and artist-led tour on Friday, March 27 from 6-8pm.

Although both Adams and Moon use forms other than masks, the mask, whether grounded in tradition, imagination, or both, is central to the show. While masks might connect us to specific roles or cultural practices, they can also be disguises or alternative identities – they are tools for shapeshifting. Assistant Director Marilyn Zapf notes, “I had met both artists over the past year, and I thought putting this show together would create an interesting and vital conversation. Although these artists have never been paired before, their works speak to one another and asking questions about the role of craft in constructing and deconstructing cultural identity.”

Adams, a member of the Eastern Band of Cherokee Indians, crafts large, decorative masks carved in wood and other materials educating viewers on tribal traditions. Works like the striking Lord of the Hunt / Tsu l’Ka Lu represent a legendary Cherokee figure, while others, like the much smaller Ghostface Galaxy, arrest the viewer with their imaginative depictions of time, space, and place. “My mission in art has always been a very simple attempt to solidify and resurrect Cherokee culture,” says Adams. “My pursuit of ancient legends and mythical Cherokee figures has always allowed me to recreate my vision of the past. Through these visions of shapeshifters and ancient beings, I’m attempting to draw the viewer into educating themselves about the sacred ground they walk on and the principal people that were here before.”

Korean-born Moon creates paintings, norigae (knotted ornaments), tal (masks), and other works that playfully interrogate definitions and boundaries between art and craft, high- and low-brow, and established and invented. Works like Bless Your Heart, on traditional hanji paper with a quilted border, are drenched in vibrant color, blurring the lines between Korean folk iconography, pop culture representations of Asian identity, and symbols of Southern culture. Ultimately, these pieces not only offer new possibilities for representing self and society, but also for understanding practices of making and viewing. “People seem not to take paper so seriously,” Moon reflects, “but our artistic education and history in Korea is work on paper and silk. When I moved here and people made distinctions between painting and illustration, I started thinking about how people categorize things unnecessarily, and that became a really important issue for me. That translates into the way I tell stories in my work. I'm presenting my observations, and that starts a bigger conversation.

‍A closing reception with the artists is scheduled for Friday, March 27, from 6-8pm. The exhibition is free and open to the public, and includes opportunities for hands-on education and engagement. Learn more at centerforcraft.org.